skip to main | skip to sidebar

May the muffin rise to greet you, may your friends be always at your door, and until we meet again, warm a single-malt in the palm of your hand and make something homemade for someone you love. 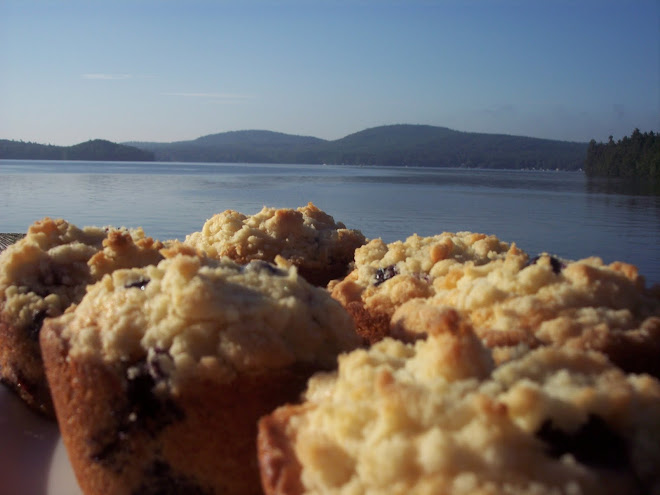 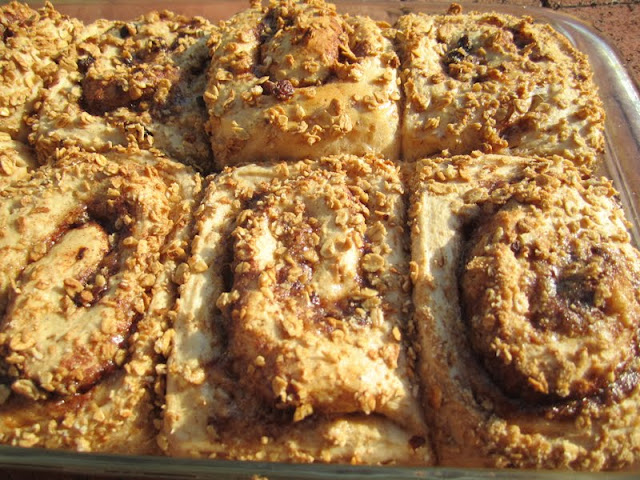 In June, Gale Collier (of Oregon) won the 2011 Festival of Breads amateur bread baking contest in Kansas with a recipe for quick raisin granola breakfast rolls, in the quick and easy category.  I set the recipe aside to try in the fall since it reminded me of something you would find at a Bed and Breakfast in Vermont. 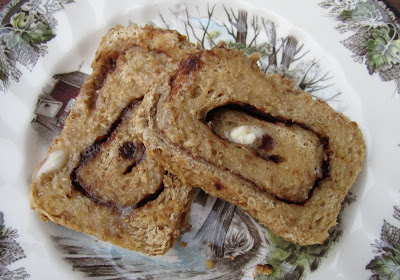 Well, yesterday I started to make them and only then noticed it was a bread machine recipe, so I had to play with it since I don't use a bread machine.  While converting it, a thought occurred to use the dough for a more wholesome cinnamon bun.  They came out great and were especially delicious sliced, toasted and buttered.  Although they reminded me of a cross between a bowl of oatmeal and a cinnamon roll, Audrey wasn't buying it.  She clearly prefers the original, old fashioned cinnamon roll. 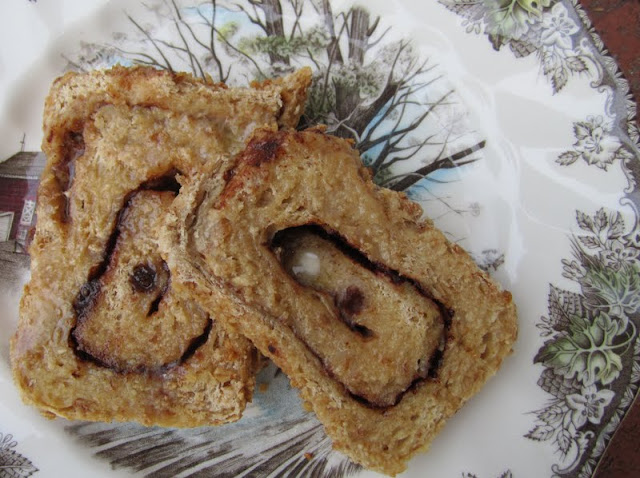 I liken it to comparing ice cream to frozen yogurt.  Is frozen yogurt good?  Yes.  Is it as good as ice cream....um...no.  A classic cinnamon bun from Cinnabon has about 880 calories.  One of these raisin bran granola cinnamon buns would be about *500.  That's a significant difference, but for me it was the whole-grain boost that got my attention.  I liked them enough that I would make them again for sure and thought they were worth sharing with you.  The sinful ones will be reserved for special occasions, such as Christmas breakfast or brunch, where they are a tradition.
If you have a bread machine, feel free to follow the link to the original directions. 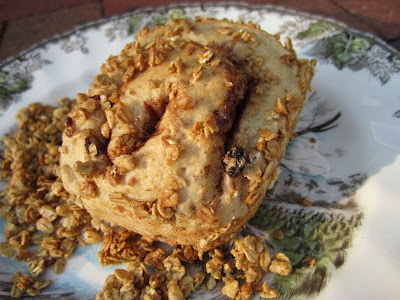 Raisin Bran Granola Cinnamon Buns
Dough:
1 cup raisin bran cereal
1 cup cinnamon raisin granola
2 tablespoons butter, softened
2 tablespoons brown sugar
1 tablespoon honey
2 cups buttermilk, at room temp, or warmed gently
1 teaspoon salt
4 cups bread flour
1 1/3 cups wheat pastry flour
1 package active dry yeast
Filling:
3 tablespoons butter, softened
1/3 cup brown sugar
1 tablespoon cinnamon
Topping:
1 cup granola, crushed
1 egg white, beaten
Place raisin bran and granola in a large plastic bag.  Using a rolling pin or meat mallet, finely crush cereal.
If your buttermilk is cold, place in a saucepan on low and gently warm it (not to exceed 110 degrees), just til it is warm to the touch.  Do not let it get too hot or boil!  Stir in butter, brown sugar and honey and yeast; set aside.
In a large bowl, add crushed cereals, 2 1/2 cups bread flour, 1 1/3 cups wheat pastry flour and 1 teaspoon salt.  Stir in wet ingredients.  On a large cutting board or kneading surface, add 1 cup of bread flour, spread out a bit.  Turn dough onto the flour.  Sprinkle more flour on top of dough and knead for 5 minutes, adding more bread flour as needed.  Place dough in an oiled bowl and turn to coat all sides.  Cover bowl with plastic wrap and place in a warm, draft-free room.  Let rise for one hour or until doubled in bulk.
Grease a 13x9 inch baking pan.  Punch down dough and pat 12x12 inch square.  Spread square evenly with butter and then sprinkle on the brown sugar and cinnamon, distributing evenly.  Roll dough up and pinch end to seal.  Slice roll into eight equal pieces.
Beat egg white in a shallow bowl.  Placed crushed granola in another shallow bowl.  Dip each roll top and side in egg white and then in crushed granola.  Place in prepared pan.  Cover pan with plastic wrap and let rise for an hour or until doubled in size.
Preheat oven to 350 degrees.  Bake rolls for 25 to 30 minutes until golden brown.


*caloric data calculated thusly:  One batch of original rolls makes 16 rolls at 194 calories each.  The same amount of dough made 8 cinnamon buns, so they would be 388 each, plus an extra 112 for the butter and sugar filling.
Posted by Margaret Murphy Tripp at 10:27 AM

These buns look incredible! I love all the ingredients and flavors in them. Yum!

@Russell: Thank you! They freeze well too. I thawed one out overnight and toasted it this morning and it was delicious! Glad you could stop by.

Margaret...this bread is beautiful! I love the bran and granola and cinnamon....this must have made your kitchen smell like heaven when it was baking! Glad you were able to adapt it from the bread machine recipe!

@Anne: They were very easy and the dough was a pleasure to work with. Not tricky at all. The house did fill with a heavenly cinnamon and yeasty aroma that mads baking cinn bunns such a joy! Nice to meet you, glad you had a chance to happen by!

OMG...sending this to my brother, the family baking whiz!

@Kate: Great! I hope he gets a chance to try them!

Looks great. Of course, you can make your own granols too - very simple and easy. I've a tried and trusted recipe at http://theirishbakers.blogspot.com/2010/10/easy-granola-updated.html

Margaret Murphy Tripp
New England, United States
I've loved to cook since I was a child and have collected recipes and cookbooks for as long as I can remember. I appreciate good food, good company and a good laugh and I'd like to share all three with you.